The best documented cases of skinwalkers are the Navajo, which literally means “he gets on all fours.” They used to wear a pelt of the animal they wished to shape shift into, but that ancient practice faded as the pelts could be sued to identify who the skinwalkers were. (http://en.wikipedia.org/wiki/Skin-walker)

In 1978, Frances T. and her family had a brush with skinwalkers while driving through Navajo land in Arizona. Twenty miles away from the nearest town, they were driving alone on a dark country road. They went around a bend and saw a creature shapes like a man and wearing men’s clothes, but otherwise he was hairy and didn’t look like a man. Everyone in the family saw it. A couple nights later, the younger two family members saw the skinwalkers again; they were trying to hop over the family’s back fence but couldn’t quite get their legs up high enough to make the hop. When a Navajo friend was approached about the strange sightings and experiences, the family was told the skinwalkers risked exposing themselves to get close enough to the family to steal their power. The Najavo Native then blessed them family, and they haven’t had any skinwalker experiences since. (http://paranormal.about.com/od/othercreatures/a/aa061801.htm)

In Navajo beliefs, skinwalkers are witches who can take the form of any animal they wish. They are said to be powerful enough to mind control their victims to suicide if desired, are fast enough to run faster than a car, and can even jump off a mesa cliff with very little effort. While not all Navajo witches are skinwalkers, all skinwalkers are witches. Horrible crimes have been pinned on skinwalkers from murder to necrophilia to grace robbing to making people ill. To gain initiation as a skinwalker, one might even turn on their own human family and kill a sibling. (http://www.rense.com/general77/skin.htm)

To learn more about Navajo folklore and beliefs pertaining to skinwalkers, visit http://www.navajolegends.org/navajo-skinwalker-legend.

Tonight my family of four got together to do my ADF High Day Ritual. We welcomed all the deities and spirits in, the main ones being Perspehone and Hades so we could observe the rape of Persephone as well as celebrate their marriage.

One of the things ADF Druids do that I really like is, toward the end of the ritual, we make “wishes” and ask the deities to grant them. Then we use a form of divination to draw the Omen to see how the dieites respond to our request.

My 4-year old daughter, Cassandra, asked to never be separated from her family. She drew the Tarot catd THE SUN as her Omen.

My 8-year old daughter, Concetta, asked for a new rocking horse, and she wanted freedom for all the good people in the world (but not for the bad people. She drew the Tarot card THE LOVERS as her Omen.

I asked for my psychic business to take off so I can use it to support my family, for my will to remain strong as I recommit to being a Vegetarian again, and for the path to open up for me to get a dog. The Tarot card I chose was the TEN OF PENTACLES as my Omen.

My husband, Michael, asked for justice and prosperity. The Tarot catd he chose was TEMPERANCE as his Omen.

We also drew a card to ask if the divine was happy with our rite, and the Tarot card we chose was the FOUR OF WANDS.

What a beautiful ritual, and what positive Omens! 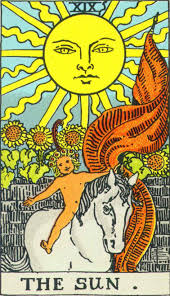 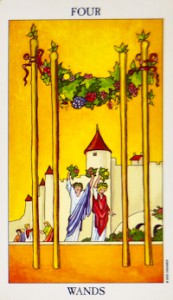 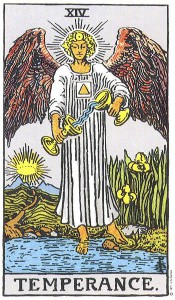 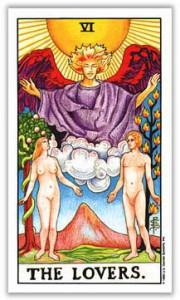 Original Blog can be found at: http://cadella.livejournal.com/4619.html

I’ve chosen to take the first steps on the Dedicant Path so I can understand my own connection to the divine better, and to eventually serve as a member of the clergy. I would also like to merge my two spiritual paths – Roman Paganism/Strega and ADF Druidry – into one by founding an ADF protogrove. There are many things that building a grove and going through the Dedicant Program and Clergy Program have hand in hand. From what I understand, they compliment each other well.

I expect to learn a lot from the ADF Dedicant Program. I want to learn to feel comfortable and at home with the format of the ADF ritual. I want to reach a new level of meditation with the Two Powers meditation. I also hope to learn a lot more historical truth than fakelore. That’s one thing I really respect about ADF; they would rather have facts than a romanticized fiction.

I expect to get a lot out of this journey. In addition to completing the Dedicant Program and being able to move forward. I expect to build up more of a respect for the Wheel of the Year. As a Roman Pagan in a mostly Wiccan and Celtic Pagan geographic area, I get so fed up with people saying they are Roman or Hellenic, but they follow the Wheel. Since I’m dedicating to ADF and taking my education with them seriously, I’m hoping a better relationship with that damn Wheel will emerge.

This path will take me to a place where I can either start the Initiate’s Program or the Clergy Program. Both are programs I want to complete. I’ll probably decide which to do first based on where my protogrove is at the time. If it looks like we could turn into a grove shortly, then I’ll probably go right into the Clergy Program. If we’re still building our numbers and we’re taking it slow, I’ll go to the Initiate’s Path next. Either way, I’m looking forward to completing all three programs.

I’ve started and stopped this journey many times over the past nine years. I honestly don’t know why it fizzled out so many times before, but this time it feels like the momentum is building and I’m going to actually do it this time. It’s probably because both my children are in school now and I finally have time to myself that I can count on and set aside to do my spiritual studies. Being a mother of very small children is all consuming. Now that I’m thinking about teaching them spirituality, it feels good to belong to ADF and know that I can teach my children ADF Druidry.

The actual work looks easy enough, but being consistent is the hard part. But this time I’m going to be forgiving on myself if I fall behind schedule. If I don’t complete 52 lessons within 52 weeks, it’s ok. I can take as long as I need. Each lesson I complete makes me one step closer to being an actual Dedicant.

The requirements that look hard is the journaling. Not that journaling is hard, but finding the time to do it and be thorough and consistent is hard for someone who procrastinates sometimes. Another requirement that looks hard is leading my own ADF rituals. I’ll have to keep referring to the outline to make sure I have it right and what the next step is.

The requirement that will be easiest for me is the book essays! I’m a bookworm as it is, always have been, so to have an excuse to make time in my day to read is going to be very satisfying.

I don’t have any questions or concerns at this time. I simply have excitement!

Original blog can be found at: http://cadella.livejournal.com/3598.html

I’ve been flirting with this course of study for 9 years now, so I’m finally just going to do it. If you’re not familiar with ADF, you can read more about them via their web page.

My target audience for this blog is fellow ADF members, and somewhat the larger Pagan community. People who don’t fit into those categories are still welcome to follow the blog and ask questions.

I submitted paperwork this past week to start my own ADF protogrove, so I figured this is the right timing to start this journey as well. My plan is to reach the status of Fully Chartered ADF Grove right after I complete the ADF Clergy Program, which will be my next course of study.

And to clear up any confusion, my birth / legal name is Kelly, and my spiritual name is Cadella. I’ll answer to both. 🙂

Thank you for taking an interest in my journey!